VANCOUVER’S HISTORIC GASTOWN – DO YOU KNOW HOW GASTOWN GOT IT’S NAME? 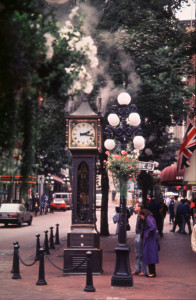 It all started back in September 1867 when a Fraser River Pilot named Capt. John “Gassy Jack” Deighton arrived (he received his nickname because of his penchant for spinning tall tales and talking without end). He stepped ashore with a barrel of whiskey, telling the lumber mill workers that if they’d build him a saloon, he’d serve them drinks.  A 12 foot by 24 foot wood board and batten shack structure was quickly built by mill workers.  Gassy Jack had his saloon up and running within a day… just across the property line of the lumber mill.  Why this location you ask?  The mill owner simply would not allow alcohol on his land and the most logical location was the lot next to the mill where alcohol, per Gassy Jack, would be allowed. Gastown was born that day and has since become a significant part of what is now the historic district of Vancouver with quaint buildings, shops, cafes, an old steam clock, pubs / restaurants and much more for all to enjoy.

When traveling with CTE to the Canadian Rockies we tour Gastown.  Guests on CTE packages will also enjoy the four star Westin Bayshore waterfront resort – only a 15 minute stroll along the waterfront will bring you right into the heart of Gastown.